San Diego proved that reality can ravish reverie.  Prior to the 2020 USATF Cross Country Championships, members of the Shore AC men's 60+ team were California Dreamin' of a podium finish.  On paper, we had a shot at placing third within a strong field of nine teams.  While two teams from Colorado had a lock on the first two podium spots, Shore AC looked comparable with three other teams in a competition for the third and final podium position.  Our hopes were stoked further when, while chatting before the race, we learned that two of Kansas City's five teammates had failed to show due to a winter-weather flight cancellation.  It appeared that the door of opportunity had opened wide!

Alas for our Shore AC men's 60+ team, the Jamul Toads of California had added a runner in the eleventh hour that boosted their prospects.  Although the added athlete wasn't particularly fast, he finished 7 points ahead of the fellow who would otherwise had been their final scorer.  Given the parity among the four teams battling for third place, that's all the Toads needed to hop into third place.  Their 35 points just edged us and Cal Coast off the podium, with both of us having scores of 38.  (Shore AC was awarded fourth place by virtue of the third-man tie breaker rule, sending Cal Coast down to fifth place.)  Kansas City, with their storm-depleted crew, had to settle for a sixth place finish with 43 points.

Our valiant 60+ trio was led by the ever-upbeat Kevin Dollard.  Kevin came to San Diego on a mission: to win hardware in the XC race, welcome family members to paradise and watch the best golfers in the world tee off at Torrey Pines.  A silly hamstring pain was no deterrence!  Except that the hamstring pain worsened during the race.  Reduced almost to walking the several short downhill stretches with what was later diagnosed to be a hamstring tear, Kevin lost valuable time and finished in 35:11.  (Note that the course was at least 0.1 mile longer than 8K.)  Interestingly, had Kevin been able to run a mere 7 seconds faster and edge out Jamul's second man, Shore AC would have taken third place.  It goes to show how intensely close the competition was in the 60+ category.

Not far behind Kevin, Shore AC's number two harrier, Hal Leddy, was keeping a good pace and preparing to accelerate into the fourth and final loop of the race.  Suddenly, calamity struck!  The shoestrings on one of Hal's shoes came undone -- despite having been double-knotted -- and the shoe flew off of Hal's foot.  Hal figures that he lost 20 seconds turning around, retrieving the shoe and tying it back on.  Hal completed the course in a very respectable 35:50.  He was tantalizingly close -- 20 seconds -- to three other 60+ men.  If the shoestrings had not untied, might Hal have finished 3 points better and carried us onto the podium?  The vagaries of cross country can be astounding.

Our final runner on the Shore AC 60+ team was Scott Linnell.  The question in Scott's case was whether his plantar fasciitis had subsided enough that he could delver a decent time and keep the team in the hunt.  Though his puttering 7:10 per mile pace put that goal in jeopardy, Lady Luck gave us a break.  Scott was just fast enough to rank as the next 60+ scorer behind Hal Leddy despite finishing nearly a minute behind in 36:46.

With our fourth-place finish and the accompanying 70 Grand Prix points, the Shore AC men's 60+ team now occupies seventh place in the Grand Prix with 75 points. 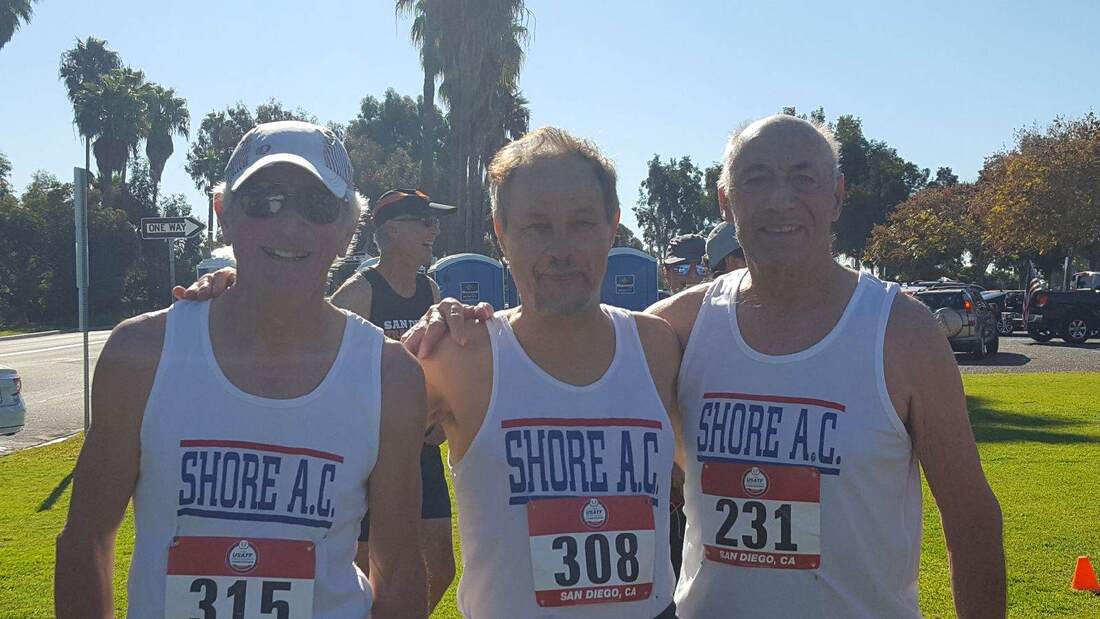 ​
Men's 70+ Team:
The goal with our Shore AC men's 70+ team was simply to get a team to the starting line.  Last year, misfortune dogged the 70+ men so persistently that we couldn't once scrape together three healthy guys to enter a team in a national race.  We did manage to get the ball rolling at the USATF Club XC Nationals in December at Lehigh -- the first race of the 2020 Grand Prix -- by cobbling together a quartet.  They finished last, but hey, ninth place meant putting 40 Grand Prix points on the 2020 scoreboard!

It wasn't easy to enlist three septuagenarians to travel across the continent for the San Diego race, but we got it done.  And even though two of the three did not run well, it was enough to keep the team's newfound momentum going.  They finished fourth, ahead of San Diego Track Club.  The 70 points for fourth place vaulted Shore AC to third place in the M70+ Grand Prix!

​Przemek Nowicki crossed the finish line first for our proud 70+ squad.  While his time of 48:40 might not match expectations for this highly regarded harrier, it was his first race in an over 2 month period following eye surgery.  Indeed, Przemek relied on teammate Roland Cormier to serve as his seeing-eye companion over the final loop in the course, as his vision became increasingly blurry.  Speaking of first races following time off, it was the first USATF National LDR race for 80-year-old Roland Cormier in 5 years.  Roland celebrated his return to national competition in style, winning his 80-84 age group in a scintillating 48:42.  The third and final scoring position for the team was filled by the legendary Roger Price.  Lyme disease has brutalized this brave man, who only 5 years ago was terrorizing other 60+ runners with his speed.  Now at age 70, his performance varies from good to miserable.  San Diego ranked in the latter category.  On the bad days, Roger has no energy.  He staggered across the finish line in 49:33, wondering what can be done to combat the tick-borne scourge.  Kudos to all three of our venerable 70+ gentlemen for giving everything they in this race had for Shore AC. 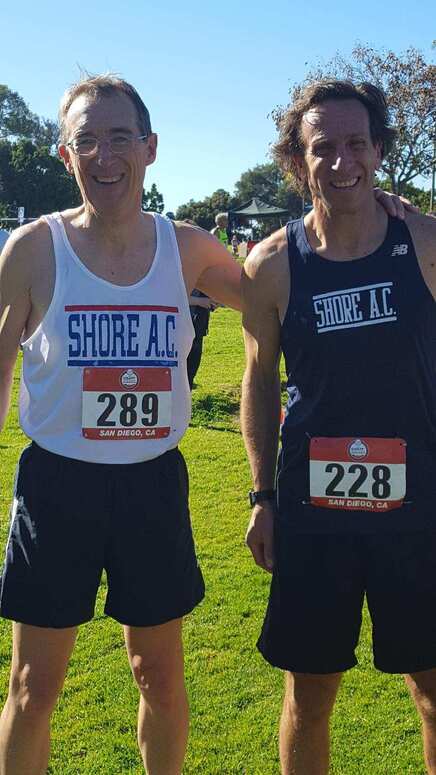 Individual Performances:
We had one Shore AC athlete running on his own -- i.e., without a team -- at San Diego.  Jeff Conston logged a terrific 31:55 to place 11th among 24 finishers in his 50-54 age group. 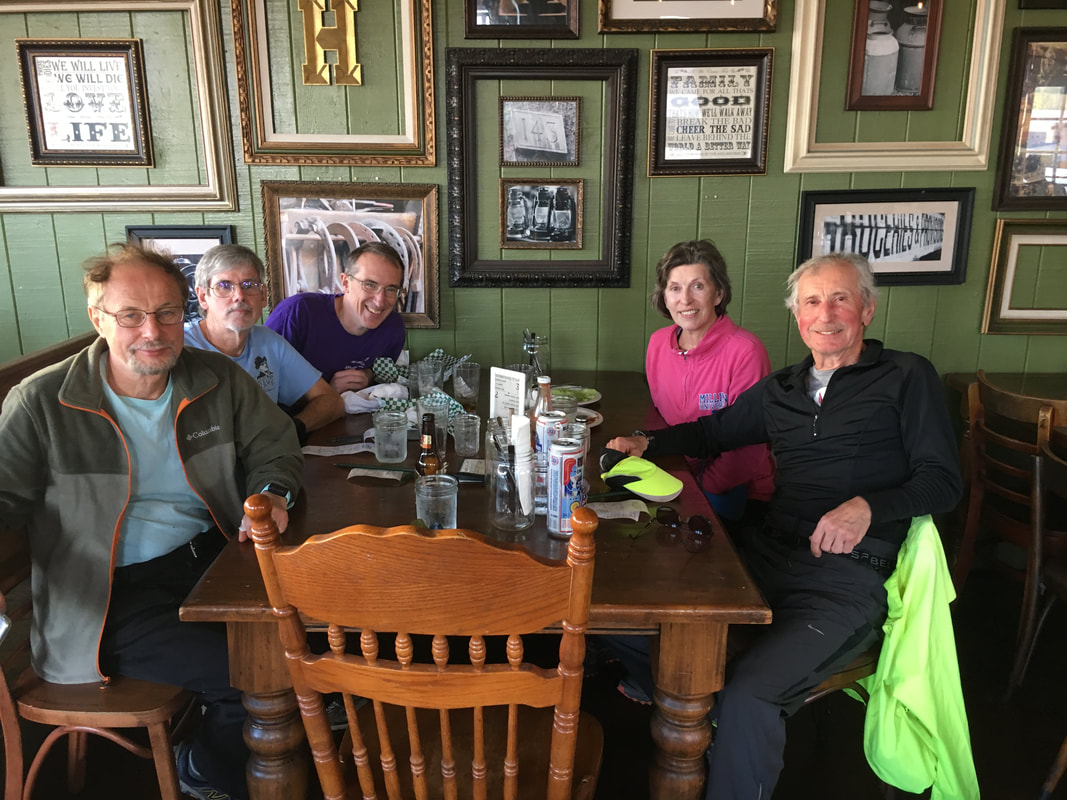