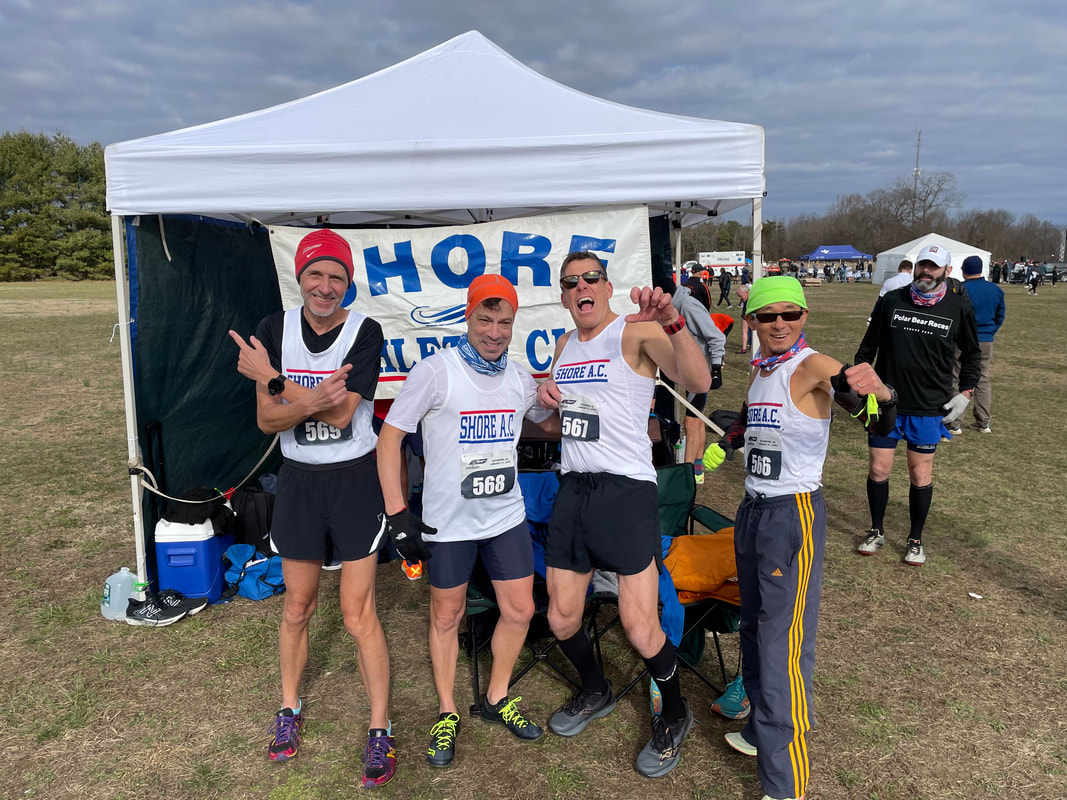 As you, dear reader, might know, the harriers of Shore AC want to follow up last year's accomplishments in the National Grand Prix with even greater success this year.  Last year, two of our age group teams (women's 50+ and men's 60+) won.  This year, we hope to place more of our age group teams on the Grand Prix podium.  However, to reach the Grand Prix podium, a team generally needs to compete in five or more races.  (A team's Grand Prix score is based on its best five races.)  This isn't easy.  We all lead busy lives, so getting a team of three or more runners to a distant location can prove challenging.

We did manage to assemble four Shore AC teams for the Richmond Cross Country meet.  Two teams -- 40+ and 50+ -- dove into the women's masters skirmish, while the other two teams -- 50+ and 60+ -- pounded away in the men's masters tilt.  (We had planned for a fifth team, namely men's 70+.  However, one of that trio had to scratch due to circumstances beyond his control, leaving us with less than the minimum of three runners required for a team.) 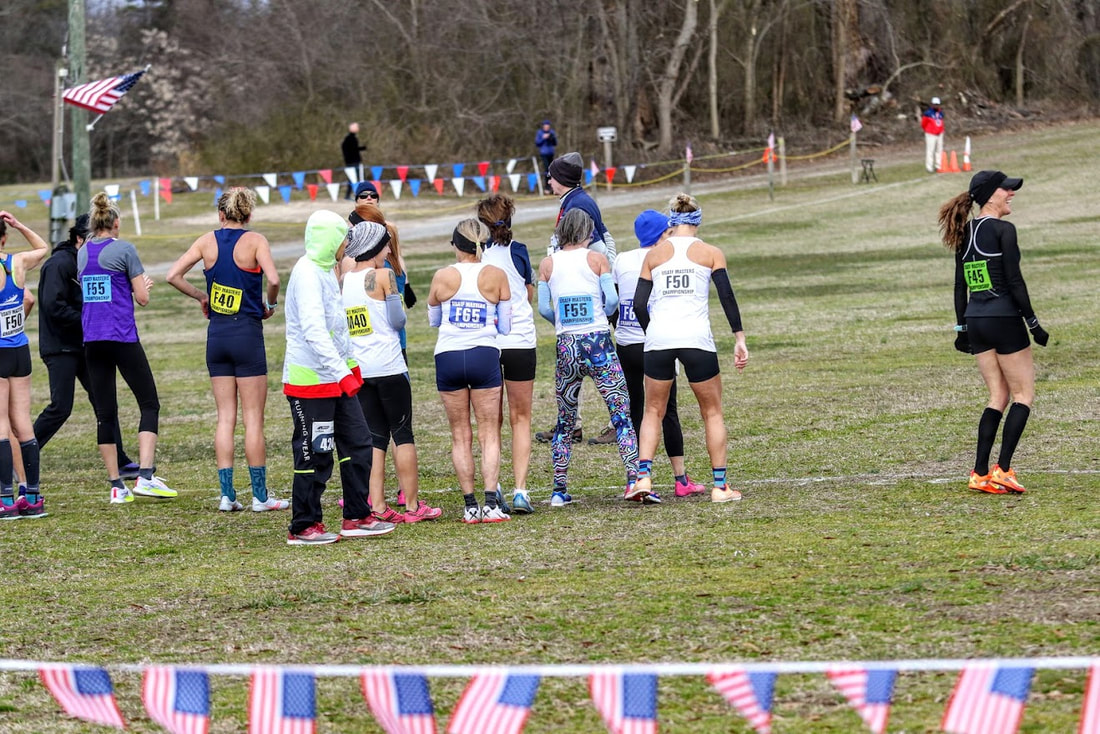 January 21, 2023, Mechanicsville, VA: Shore AC masters ladies find their spots along the starting line while waiting for the gun to sound.  Such excitement!  Photo courtesy Rick Lee.
So, you ask, how did the races go?  Well, when the dust settled after the women's race, our 50+ crew was declared the winner!  Their exciting victory came via a razor-thin margin of 1 point over rival Greater Philadelphia.  Suzanne La Burt led the charge, kicking out a magnificent time of 25:11 to snare second place among all 50+ women in the race.  Next, 67-year-old Nora Cary stunned the admiring crowd with an incredible 26:21 clocking.  Her blistering pace earned Nora second place in the age grading competition.  Alysia Puma then wrapped up team scoring when she flew down the finish chute in 27:00.  Alysia's 16-second edging of Greater Philadelphia's third runner cemented Shore AC's win.  Hooray, ladies!  Their victory puts the Shore AC W50+ team in second place in the Grand Prix. 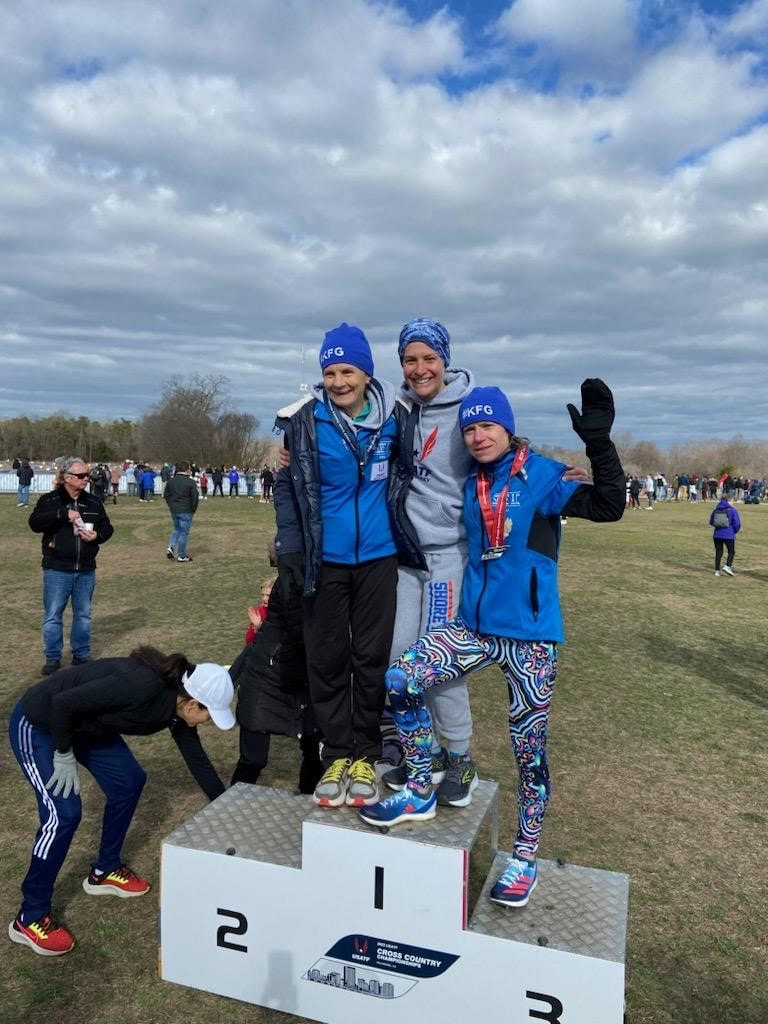 January 21, 2023, Mechanicsville, VA: The Shore AC women's 50+ team beams with joy over its hard-earned victory.  Left to right: Nora Cary, Alysia Puma and Suzanne La Burt.
Meanwhile, our Shore AC women's 40+ team fashioned a fourth-place finish in the women's masters race.  Kim Anicito rallied from the stultifying effects of driving all the way from New Jersey on the morning of the race (now that's dedication!) to find the finish line in 29:39.  Susan Stirrat employed an up-tempo pace to cover the 6-kilometer course in an excellent time of 32:05, good for third place in her 65-69 age group.  Leslie Nowicki sealed the deal as third team scorer when she crossed in 34:35.  The 70 Grand Prix points that this intrepid trio of ladies earned bumped the Shore AC women's 40+ team up to seventh place in the Grand Prix.  Well done, gals! 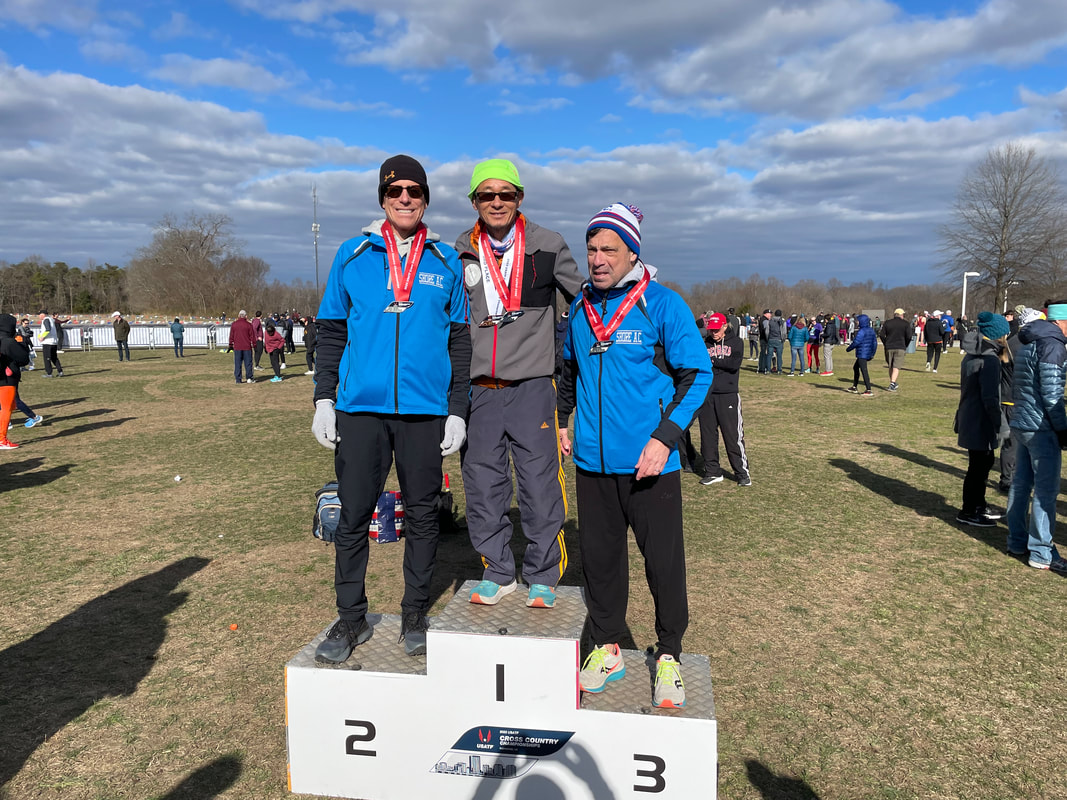 January 21, 2023, Mechanicsville, VA: Members of the Shore AC men's 60+ team stand proudly on the pudium in honor of their second-place finish.  Left to right: Henry Notaro, Rick Lee and Harry Pino.  Not pictured: Gary Wiesinger, who had to drive back to New Jersey immediately after the race.
As for the two Shore AC men's teams, things played out as expected -- and that was fine!  Our men's 60+ squad lost to an excellent team from Atlanta but beat a fine flock from Greater Philadelphia by a mere 2 points for second place.  Our wingman Rick Lee spearheaded our attack as usual, incinerating the 8-kilometer course with a scorching 29:40.  Rick's phenomenal run garnered top spot among all 60+ team members.  Drinking buddy Henry Notaro delivered an amazing 31:37 with very little recent training, thereby yielding a terrific "3" score.  Shore AC was off to a great 1-3 start!  However, other 60+ teams stuffed an impressive array of ultra-fast harriers into the chute over the next two minutes.  We were very fortunate to have new Shore AC member Gary Wiesinger in the race, but even his outstanding time of 34:34 yielded only a score of "17" in such a stacked field.  Fortunately, our overall team score of 21 clipped Greater Philly's 23.  Harry Pino provided the team with all-important insurance when he tripped the timer in 38:06.  With the 90 points that comes with our second-place finish at Richmond, our men's 60+ team takes the lead in the 2023 Grand Prix with 145 total points after 2 races.  However, this is no time to rest, as Atlanta lurks in second place with 140 points -- only 5 points behind us! 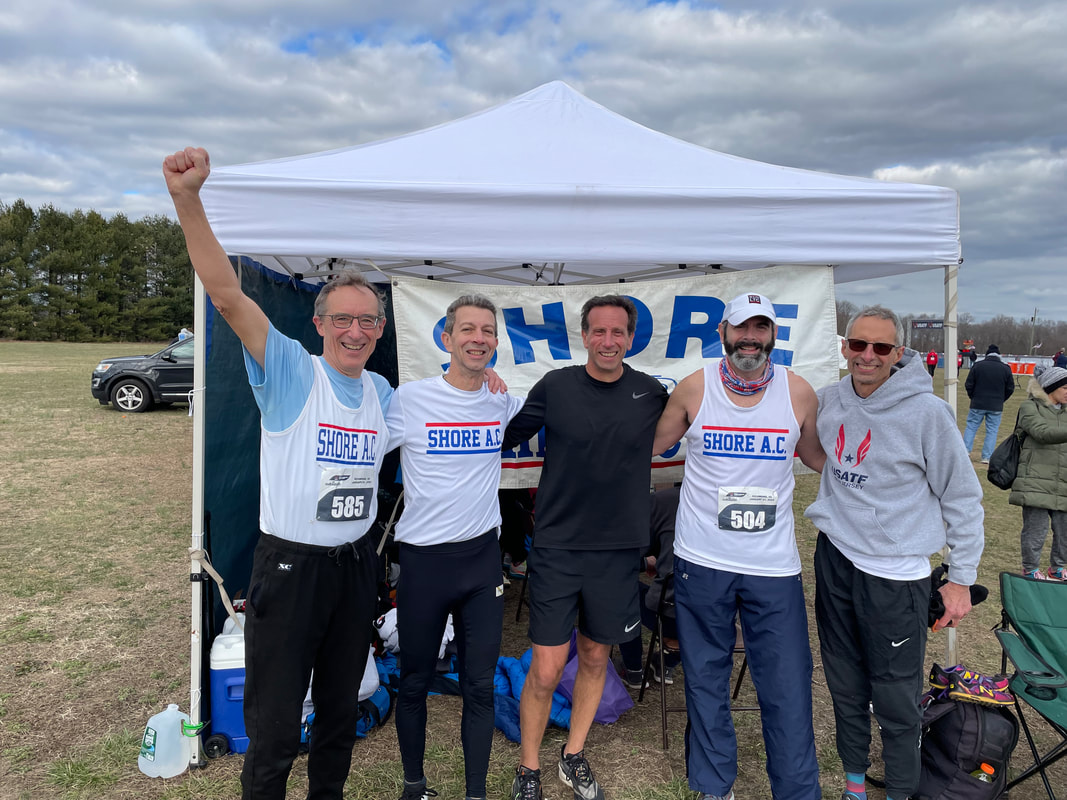 January 21, 2023, Mechanicsville, VA: Undaunted by the national-caliber competition that it is about to face, a determined Shore AC men's 50+ team prepares to race and collect Grand Prix points.  Left to right: Scott Linnell, Chris Rinaldi, Jeff Conston, Mike DiLeva and Reno Stirrat.
With regard to our Shore AC men's 50+ team, we were delighted simply to have enough guys to enter a team.  Per USATF rules, an age 50+ team must have a minimum of 5 members for National Cross Country races.  (By contrast, 60+ teams require only 3 runners.)  Given that we had to fill out our 50+ team with two harriers over the wrinkled age of 65, we expected to place in the back of the pack.  And, yes, expectations were achieved.  But our younger team members made it interesting!  Jeff Conston translated his top-notch training to a terrific 30:13, placing 12th among the 36 50+ team scorers.  Chris Rinaldi scampered across the finish line with a solid 33:29 to score 28.  Mike DiLeva completed his four tours of the 2K loop course in 35:50 to chalk up a 33.  Team scoring concluded when 68-year-old Reno Stirrat and 66-year-old Scott Linnell chugged down the chute in 36:27 and 36:39, respectively, to close out all 50+ team scoring. 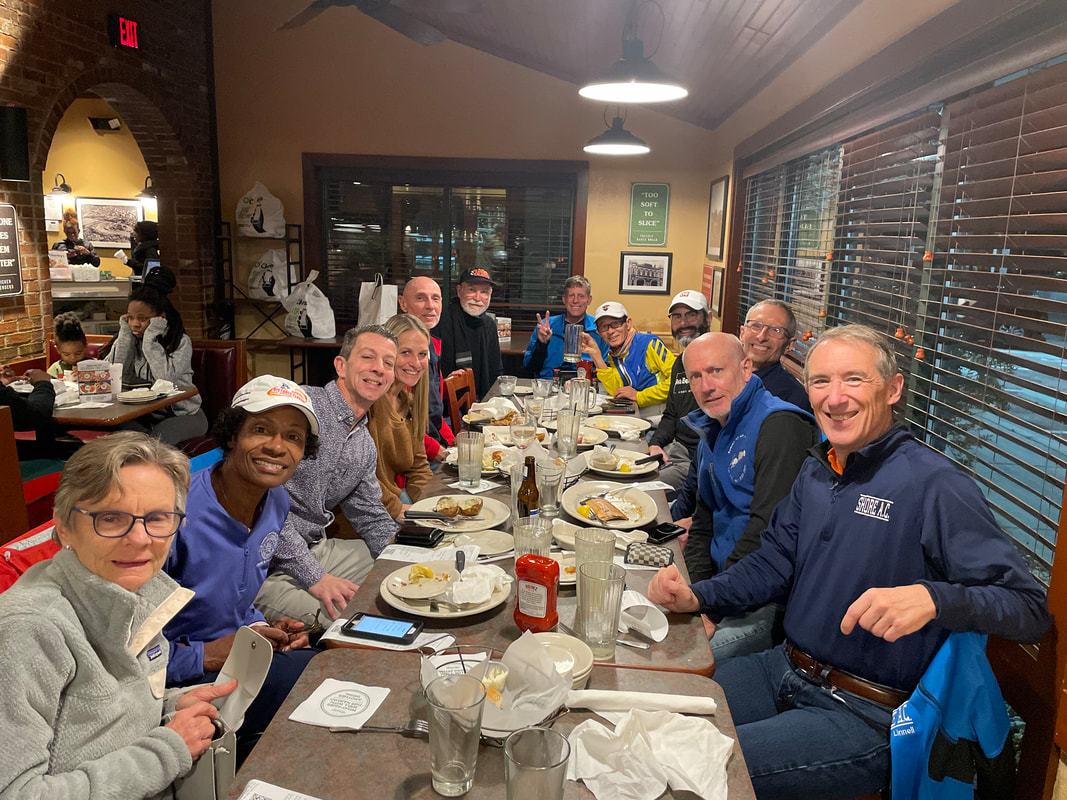 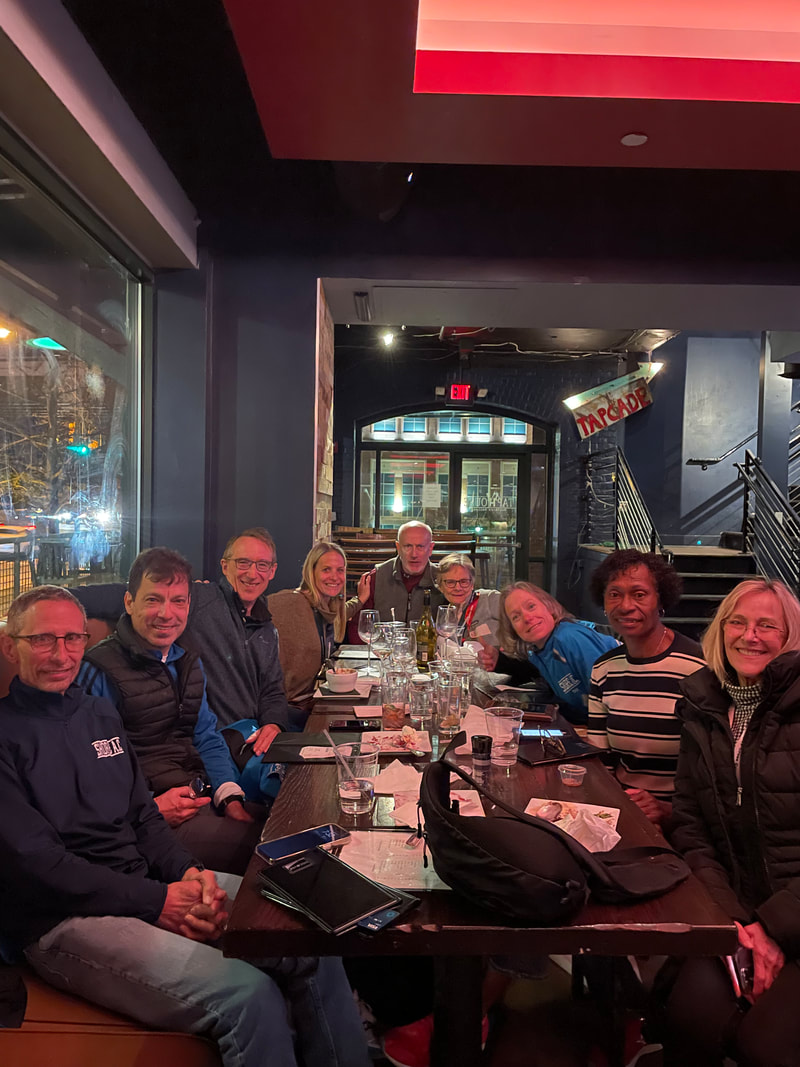