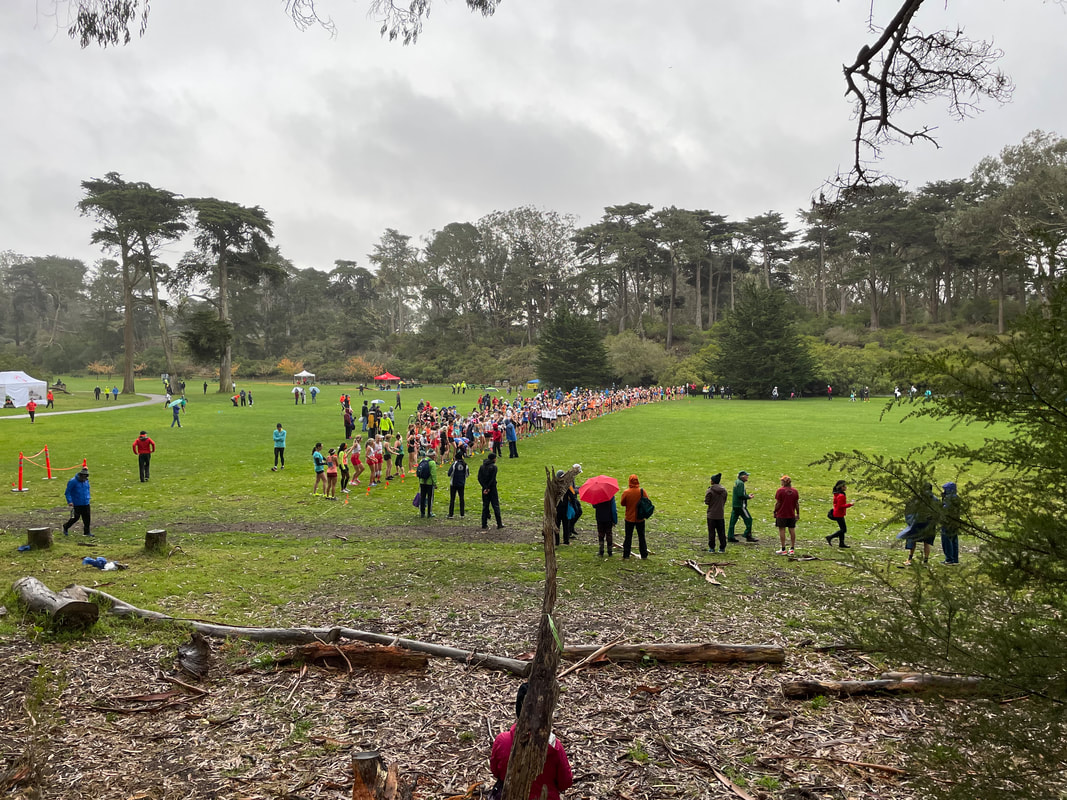 Pain!  That's what we runners endure at a national meet.  Pain!  Quad muscles screaming and there's 4 kilometers more to race.  Pain!  Lying flat on the muddy ground after a nasty slip and fall.  Pain!  Rain-chilled legs that simply won't push any faster.  Pain!  Only seconds away from the age group podium!

So, how do we rise above the Pain!?  You gotta be a Believer!

Standing on the starting line in buffeting winds and drenching showers at the USATF Club Cross Country National Championships, we believed that we could overcome the storm.  What kind of storm, you ask?  Imagine Dragons!  That's right, in San Francisco, they called it a Dragon Storm.  It struck our venue, Golden Gate Park, with venom just before the masters ladies kicked off competition.  The beast's beating wings then knocked over a towering tree during the men's 60+ race, crushing a tent.  (As far as we known, there were no injuries.)  Responding to that warning shot, the race organizers then confined all remaining races to the polo grounds track where no trees would threaten harrier safety.  Still, the unrelenting serpent heaped misery on everyone who dared remain outdoors.  To stick it out that day until your race was done, you had to be a Believer!

Who were the Shore AC stalwarts that toughed it out that day in The City By The Bay?  Let's begin with the Shore AC women's 40+ team.  First, an explanation is required.  This trio of ladies was well beyond their 40s.  We entered them as a 40+ team anyway for strategic Grand Prix reasons, knowing full well that they would suffer a huge disadvantage in this race.  Indeed, team captain Scott Linnell informed them that, per his analysis, they would likely finish dead last.  Grand Dame Nora Cary then challenged her teammates to defy my prediction.  Her exhortation?  Be a Believer!

Guess what?  It worked!  Our gals defeated not one but two other 40+ teams!  Cary led the mad dash, crossing the finish line with an absolutely superb time of 27:33.  That placed the 67-year-old fourth among all masters women in age grading at 88.69%.  (Had Nora run a few seconds faster, she would have reached second in age grading!)  Nora also placed second in her F65-69 age group.  Next to storm into the endzone for Shore AC was Alysia Puma, tripping the timer in 28:23.  The team's scoring was wrapped up nicely when Susan Stirrat zoomed down the final stretch to clock 33:35.  Thanks to these intrepid ladies, the Shore AC women's 40+ team now has a race on the 2023 Grand Prix scoreboard.  This is important because a team must compete in a minimum of three races to qualify for Grand Prix honors.  Well done, ladies! 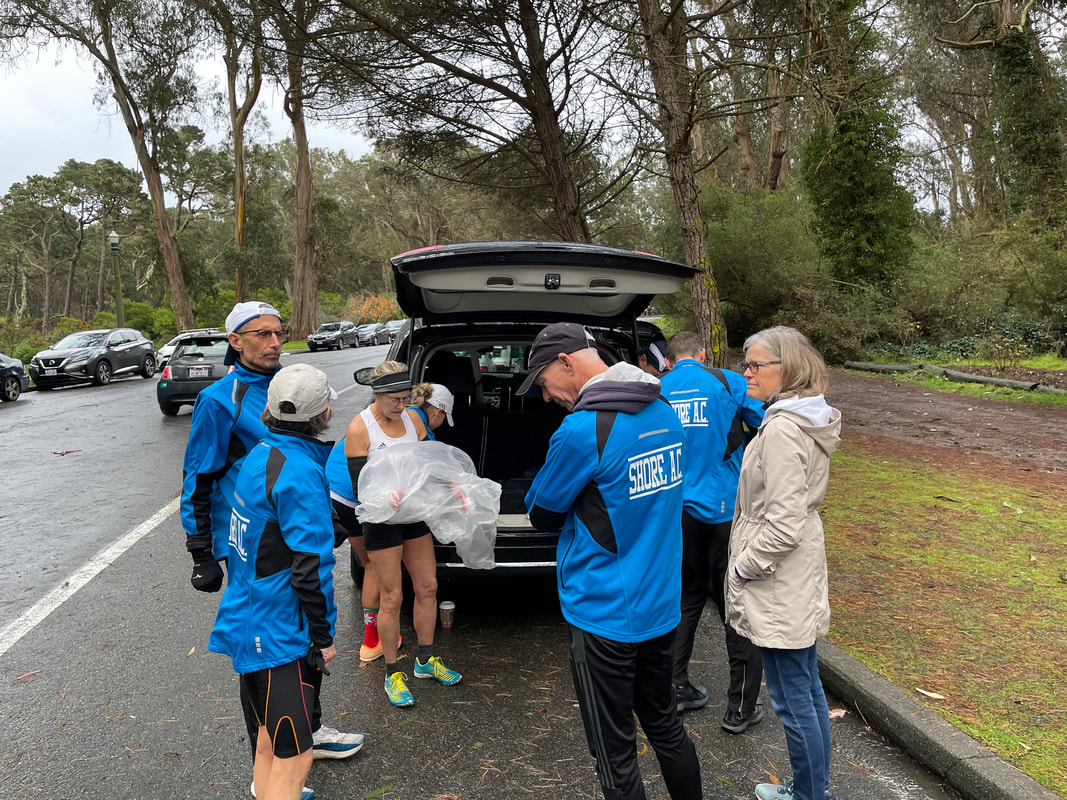 December 10, 2022, San Francisco, CA: Shore AC's much-used refuge from the Dragon Storm was a rented minivan.  Left to right: Reno Stirrat, Nora Cary, Susan Stirrat, Alysia Puma, Kevin Dollard, Don Schwartz, Henry Lee and Team Mom Denise Dollard.
Next to step up to the soaked starting line were the beastie 60+ boys from Shore AC.  We entered two teams, A and B.  Given that Shore AC had captured the M60+ crown in the 2022 Grand Prix, big things were expected from our A team.  But, although they placed sixth, it was still an outstanding accomplishment when you consider the insane level of competition at this race.  Our ace dragon slayer, Rick Lee, spearheaded our attack.  He battled the top sexagenarian runners in the land, rocketing to fourth place with a scintillating time of 29:52.  Note that Rick placed third in his M60-64 age group and fourth in age grading among all masters men!  Close behind, dragon breath quencher Henry Notaro cauterized the course with a scorching 30:40 while tossing mints into the maw of the monster.  (Okay, that was a bit of prosaic license.)  Club swinger Kevin Dollard secured our sixth-place finish by hooking a superb 34:56 as third team scorer.  Insurance man Don Schwartz ran perhaps the hardest race of all, being tormented by excruciating heel pain thanks to plantar fasciitis.  That Don could finish in 37:21 is testimony to his will power.  Count him as a Believer!  Teammates, too!

​But how about the boys on the Shore AC B team?  Could they escape the dragon?  Smaug's California cousin did swat us around, yet we all fought our way successfully to the finish line.  Scott Linnell employed recently added holiday weight to his advantage, powering through puddles (that fellow runners tried to tiptoe around) on his way to a water-logged 36:55.  Reno Stirrat fell into the clutches of the Dragon Storm early on in the race, as the incessant wind and rain sucked the warmth from his limbs.  Try as he might, Reno couldn't make his chilled legs run faster than a jog.  He finished in 38:55, far behind where he would be under normal circumstances.  As for third man Hal Leddy, misfortune befell him -- literally -- halfway through the course.  While descending a treacherous hillside, Hal's heel slipped.  He hit the ground so hard that he lay stricken for a full minute before arising and completing the course in Pain!  Hal's official time of 39:07 will surely needle him until redemption arrives at the next race.  In the end, the Shore AC men's 60+ B team finished 25th, but they still beat 7 other teams in their division.  Bravo, boys!
Shore AC also had three individual runners compete in later races.  Chris Rinaldi represented the men's 50+ team as he cruised to a terrific time of 40:47 in the men's 40+ heat.  Kari Hullen tested the waters of a national race for her first time, recording a rock-solid 25:06 in the Women's Open race.  Greg Leddy then wrapped up the day's drenched festivities with a truly superb 33:42 in the Men's Open race.

Throughout all of the day's races, Coach Joe Compagni cheered on our athletes.  He was seemingly everywhere, using a rented bicycle to great advantage.  Joe admitted later that the Dragon Storm sank its claws deep into his flesh, to the point where he could hardly move his fingers owing to the cold.  Thank you, Coach Joe, for sacrificing your comfort for the sake of us athletes.  You are the best!

​So, dear reader, are you by now a Believer in Shore AC?  Believer! 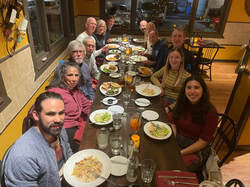