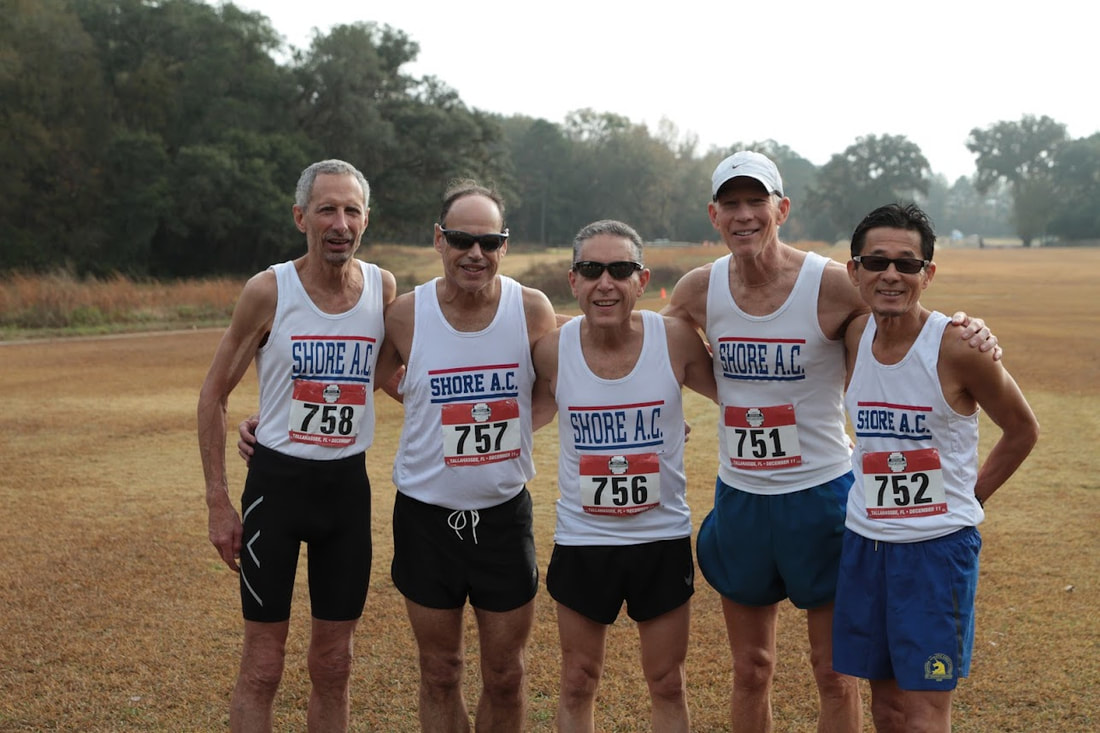 Just like carpenters, Shore AC is busy building something.  And just like they say in a famous song by The Carpenters, a popular sister-brother duo from the early 1970s, "We've Only Just Begun".  After all, the USATF National Club Cross Country Championships in Tallahassee this December 11 were the start of the 2022 USATF National Masters Long Distance Running Grand Prix.  Adapting the lyrics, we could say:
Before the rising sun we fly
So many yards to chew
We start out running and yearn to win.
​         And, yes, we've just begun! 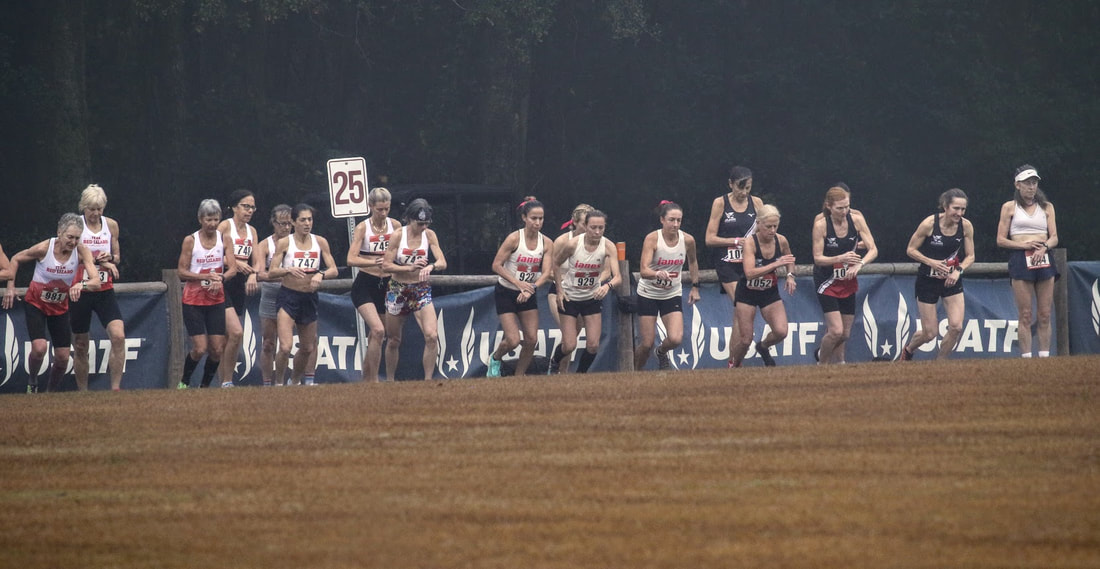 December 11, 2021, Tallahassee, Florida: Bang and they're off!  The 5-person Shore AC women's 50+ team, backed by the sign "25", begin their 6K race flanked by other top women's masters teams from throughout the country.  Left to right: Leslie Nowicki (bib #741), Susan Stirrat (749), Ali Marzulla (747), Kerry Gaughan (745) and Suzanne La Burt (746).  Photograph courtesy of Rick Lee.
The masters ladies started first in the early morning mist at Apalachee Regional Park.  Shore AC starlet Suzanne La Burt wasted no time zooming into the lead pack among 50+ women.  She maintained her ferocious pace throughout the two-loop course and finished fourth within the 50+ population.  Suzanne's magnificent time of 24:39 placed her fourth in age grading among all masters women at 85.98%.  First-year club member Ali Marzulla stunned herself and the rest of us with a superb race.  She shadowed Suzanne through much of the 2-loop course and finished less than 50 seconds behind in 25:23.  This equated to a very impressive age grading of 78.84%.  Next to cross the finish line for the Shore AC ladies was Suzanne's longtime running partner Kerry Gaughan.  (They partnered for many years with the Clifton Road Runners).  Though Kerry joined Shore AC only this year, she has longer club ties as her husband Patrick has competed for Shore AC for more than 5 years.  Kerry crossed in 29:35 to complete team scoring and secure a top-5 finish for the crew.  Traveling teams depend on having insurance runners, and our 50+ women had two beauties.  Leslie Nowicki checked in at 32:33 to continue her steady improvement in the sport, followed closely behind by 66-year-old Susan Stirrat, whose 32:45 placed her third in the 65-69 age group.  Thanks to their fifth-place finish, the Shore AC women's 50+ team has kicked off the 2022 season with a sleek 60 points.  "We've only begun!" 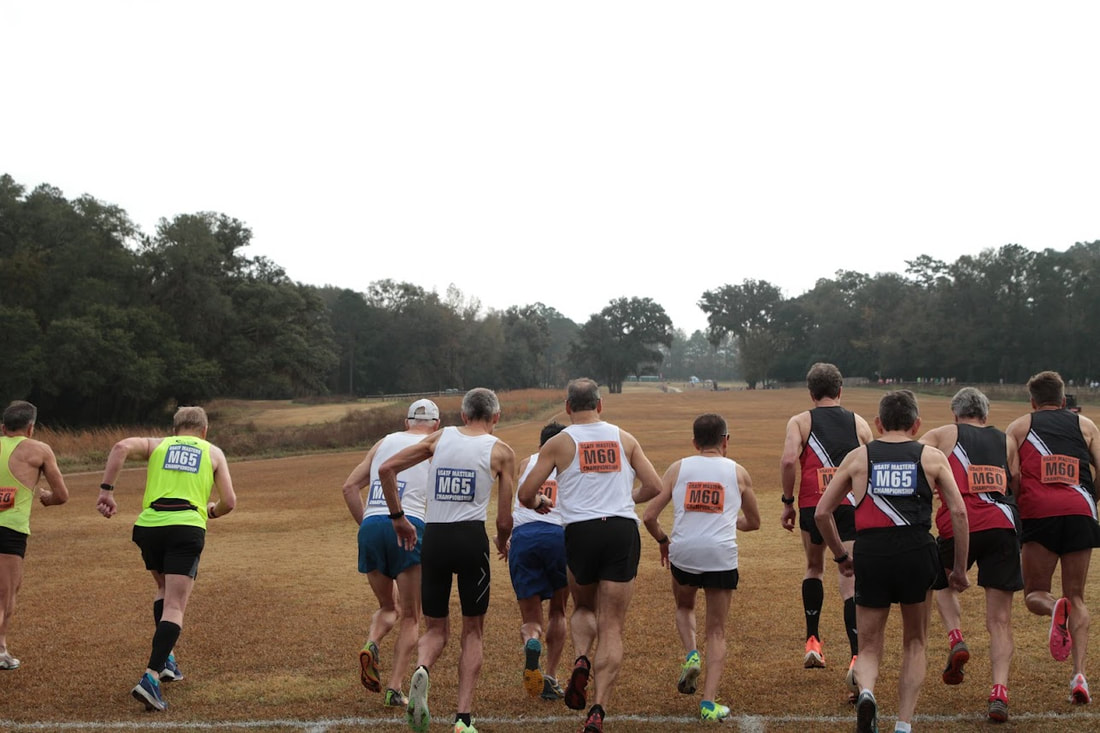 December 11, 2021, Tallahassee, Florida: The Shore AC men's 60+ "A" team blasts off from its starting box at the sound of the gun.  Left to right in white singlets: Kevin Dollard, Reno Stirrat, Rick Lee, Don Schwartz and Mike Salamone.  Photograph courtesy of Rick Lee.
The next group of runners to gather at the starting line were the elder men, those age 60 and over.  They would endure 3 loops in completing 8 kilometers.  Shore AC entered two teams in this heat.  Both were 60+ men's teams.  We had hoped to assemble a men's 70+ team, but only two members of age 70 or more made the trip to Tallahassee, one less than the minimum of three for a team.

Shore AC spirits rose to dizzying heights before the race, hoping that our men's 60+ "A" team would nail a podium finish.  After all, we had placed first at the 12K on Sandy Hook in September and grabbed second place at the 5K cross-country championships in Boston in October.  Certainly, we would achieve third place or better at Club Cross Country Nationals, right?  After all, the USATF Running Professor himself predicted a bronze-medal outcome for us.  Well, they don't call this meet The Big Kahuna for nothing.  With the fattest purse by far of any national masters race, the Club XC Championships attract top teams from throughout the country.

Our lead runner, the incomparable Rick Lee, experienced the heat early in the race.  Having jumped out to a quick lead, he was soon rejoined by the top dogs.  And they kept coming.  By the end, Rick had faded to eighth place.  His 31:16 performance was nevertheless a tremendous accomplishment!  Next in for the boys in white was first-year phenomenon Mike Salamone.  Hampered by tight spikes, Mike fought valiantly through the pain.  The poor guy was also missing his traditional pre-race lentil soup!  Unfortunately, the running gods showed no pity whatsoever.  He finished 23rd in 33:45.  The rest of us would faint over a result that good, but Mike ripped off those toe-binding shoes in disgust.  And the misery kept on coming.  Usual third man Don Schwartz hammered his first two loops, keen on lifting his team onto the podium.  However, his engine boiled over in the third loop amid the near-tropical humidity.  He struggled home to a disappointing 36:59 finish.  But, hey, that's why we stock a team with backup runners!  Our gifted drummer, Kevin Dollard, kept a steady beat to pound out a fine 34:42 and wrap up team scoring.  Veteran legend Reno Stirrat added valuable insurance when he crossed shortly thereafter is 35:01.  Our valiant warriors had to settle for fifth place within a fabulous field of fifteen teams.  It wasn't our dream, but it was still a great accomplishment!  And you know that "We'll be baaaack!" 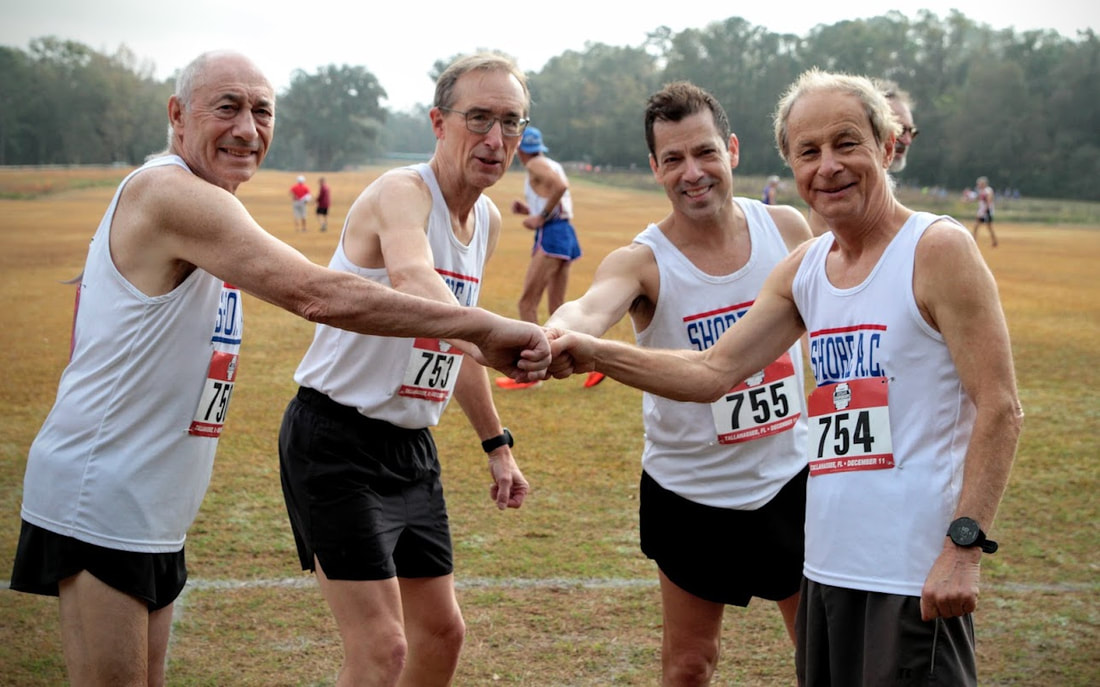 December 11, 2021, Tallahassee, Florida: The Shore AC men's 60+ B team fires up for the big race!  Left to right: Roland Cormier, Scott Linnell, Harry Pino and Przemek Nowicki.  Photograph courtesy of Rick Lee.  Photograph courtesy of Rick Lee.
Hey, you ask, what about the second Shore AC men's 60+ team?  Sadly, misfortune struck that squad as well.  All went well for the first runner, Scott Linnell, with his 35:56 being just enough to outrun the top 70+ athlete in the race.  The disaster occurred to our second man, Harry Pino.  During his third and final loop, he was tucked in close behind Scott when he felt a pop in the buttocks.  Thankfully, the medical tent was close by.  Quick examination indicated a tear in a gluteal muscle.  Now, any normal soul would have followed medical advice and withdrawn from the race.  Not Harry!  He clambered off the examination table, thanked the medical technician and resumed the race!  Amazingly, Harry covered the remaining course at nearly the same speed as before the injury.  So, now you can appreciate that his time of 39:51 represents some gutsy running!  The team's third and final scorer was Shore AC's stalwart 70+ runner for the past 7 years, Przemek "Prez" Nowicki.  Though advancing age has levied a tax on his muscle mass, Przemek summoned the ample muscles he still possesses to power through the finish line in 44:59.  In doing so, he secured 13th place for the "B" team to outduel Atlanta's "B" team and the River City Rebels.  Our famed octogenarian, Roland Cormier, donated ever-important insurance to the team with his 53:01.  Roland's fine efforts earned him second place in his 80-84 age group.  Well done, gents! 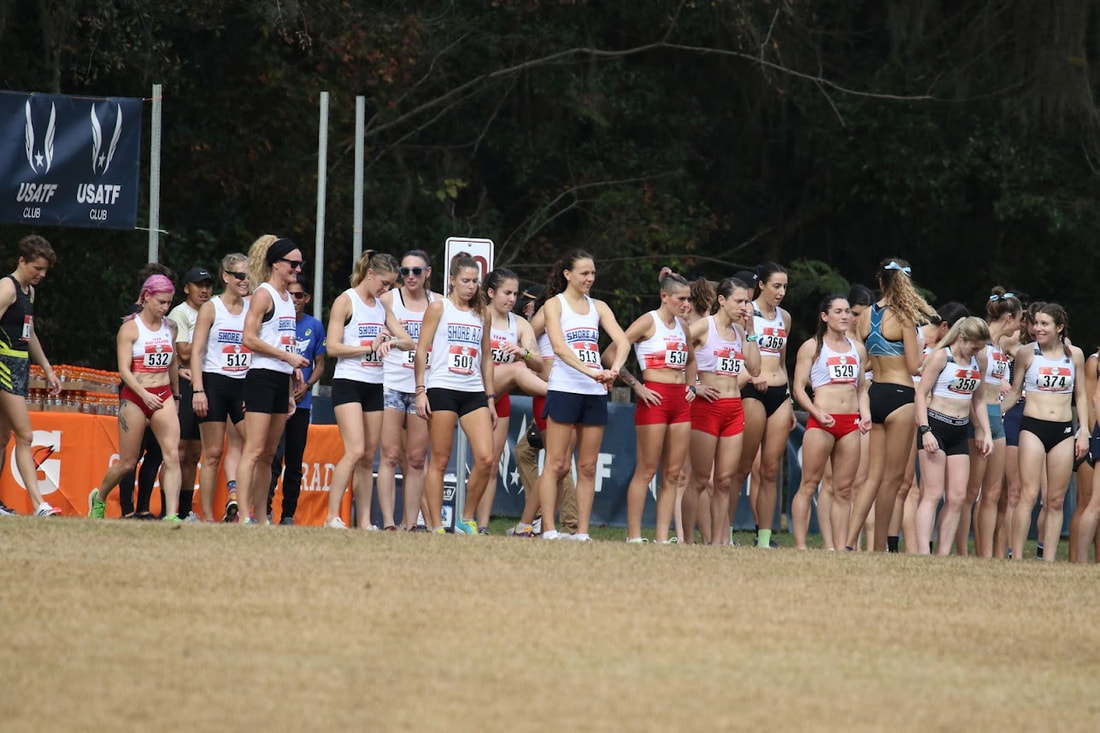 December 11, 2021, Tallahassee, FL: The Shore AC women's open team members prepare themselves at the starting line for a big race.  Left to right: Alysia Puma (512), Erin O'Neill (511), Kellee McEwen (510), Karen dos Santos (508), Amanda Eller (509) and Christiana Rutkowski (513).  Photograph courtesy of Rick Lee.
Given the steadily rising Florida warmth and humidity, the open women were singing, "If Only We Could Just Begin!".  When 12:00 Noon finally rolled around, their starting gun sounded at last.  Sensational rookie Christiana Rutkowski and speedy veteran Amanda Eller spearheaded the SAC attack.  All went according to plan for the first loop.  However, on the backside of the second loop, a race participant collapsed on the course.  Displaying honorable runner etiquette, Christiana stopped to check on the suffering competitor.  When it became clear that the fallen female wasn't in immediate medical danger, Christiana resumed her race.  Meanwhile, teammate Amanda streaked to the finish line and a superb 22:51 clocking (6:05 per mile).  Christiana soon followed in 23:15 as second team finisher.  Such a 1-2 punch would have ranked very high in a New Jersey state-level competition.  However, the $15,000 purse for the women's open race at USATF Club XC Nationals draws a bevy of truly elite teams from throughout the country.  Amanda's and Christiana's 1-2 punch translated to 72 and 87 points, respectively.  That's how it goes at The Big Kahuna!  Next in for Shore AC was our talented graphic designer and fleet-footed harrier Kellee McEwen, who composed a lovely time of 24:43.  Charging home right behind Kellee came Karen dos Santos in 24:49.  Karen was one of two Shore AC masters-age athletes who graciously agreed to switch from the women's masters race to the women's open race in order to give us the minimum number (5) of runners needed for an open team.  Shore AC race director extraordinaire Erin O'Neill wrapped up team scoring when she sailed across the finish line in 27:27.  SAC supporters soon spied our other masters-age lady, 49-year-old Alysia Puma, bounding down the last hill to complete her race in 27:53 and provide solid insurance.  So, you ask, how did our starlets rank?  In a ridiculously stacked field of 23 women's open teams, they beat the squads from The Janes Elite and from HFC Striders.  That's a laudable accomplishment! 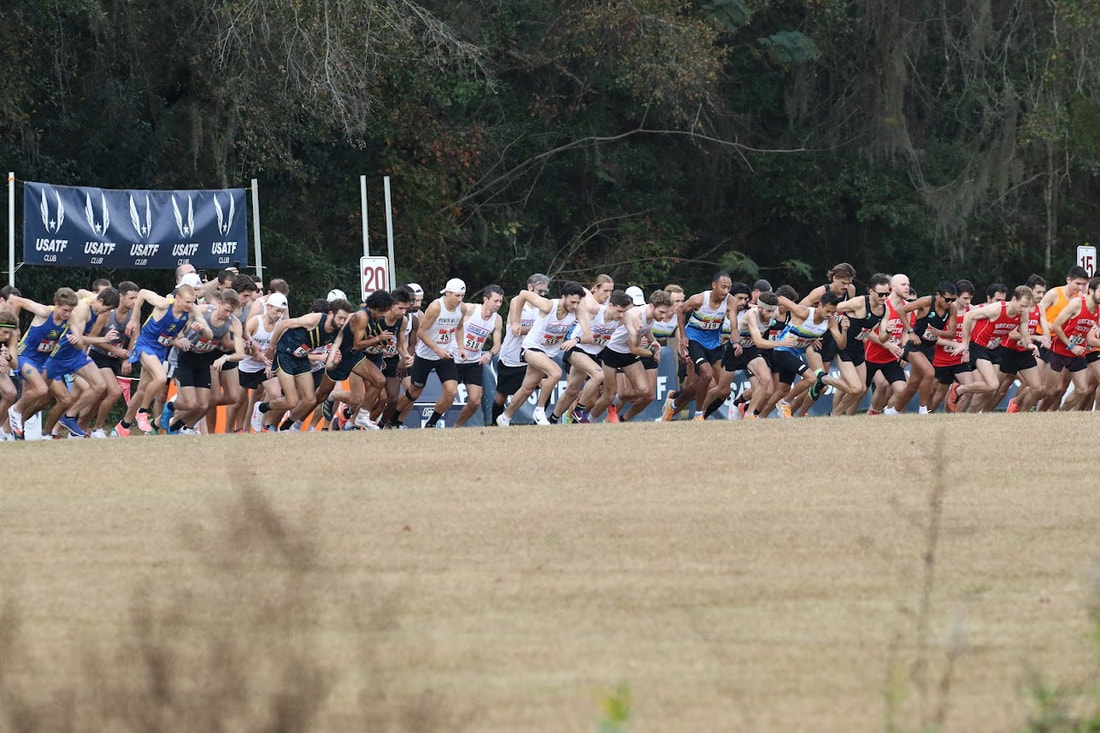 December 11, 2021, Tallahassee, FL: The Men's Open heat bursts forth from the starting line with Shore AC's team in the middle of the action!  Left to right: Chris Rinaldi (bib number 518), Mike DiLeva (514, partially obscured), Elliot Gindi (516), Ryan Mitchell (517) and Matt Farrell (515, starting wristwatch).  Photograph courtesy of Rick Lee.
Mother Nature saved her nastiest conditions for the last race.  By the time that the Men's Open heat commenced at 12:45 pm, the temperature had surged well into the 70's, the dew point had climbed close to 70 and the sun was now burning occasional holes in the cloud cover.  Race officials had decided by then to offer water to contestants during the race.  Nevertheless, fully 20 harriers dropped out of the Men's Open race.  Regrettably, one of them was Shore AC's.  Midway through the event, a cart transported an ill Ryan Mitchell back to Shore AC's equipment stash.  With one man out, Shore AC no longer had enough men to qualify as a team.  Even so, our four remaining representatives ran hard!  Elliot Gindi led the way, flying through the 4-loop course in a time of 34:50.  Matt Farrell made his Shore AC debut an impressive one, completing the race in an excellent 37:17.  Interestingly, Elliot, Ryan and Matt were Shore AC's only real open-age runners.  Masters-age harriers Chris Rinaldi (52) and Mike DiLeva (49) agreed to switch from the Men's Masters 40+/50+ race to the Men's Open race to give us a shot at having an open team.  Chris and Mike knew early on that it would be a tough day: after only 1/2 mile into the race, despite their torrid 6:10 per mile pace, they were dead last by a substantial margin.  Many people would have spared themselves the humiliation and dropped out of the race.  Not these two brave souls!  Chris and Mike persevered, finishing in 46:56 and 49:20, respectively.  Hats off to all of you great guys on the Shore AC Men's Open team! 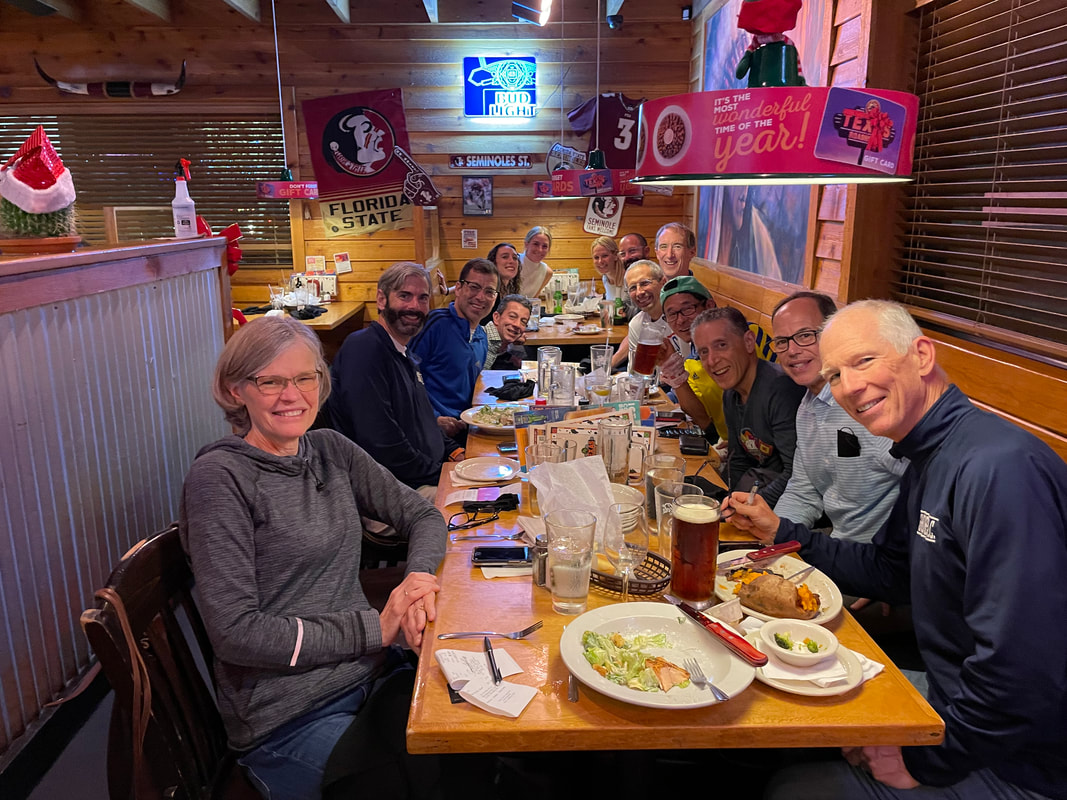