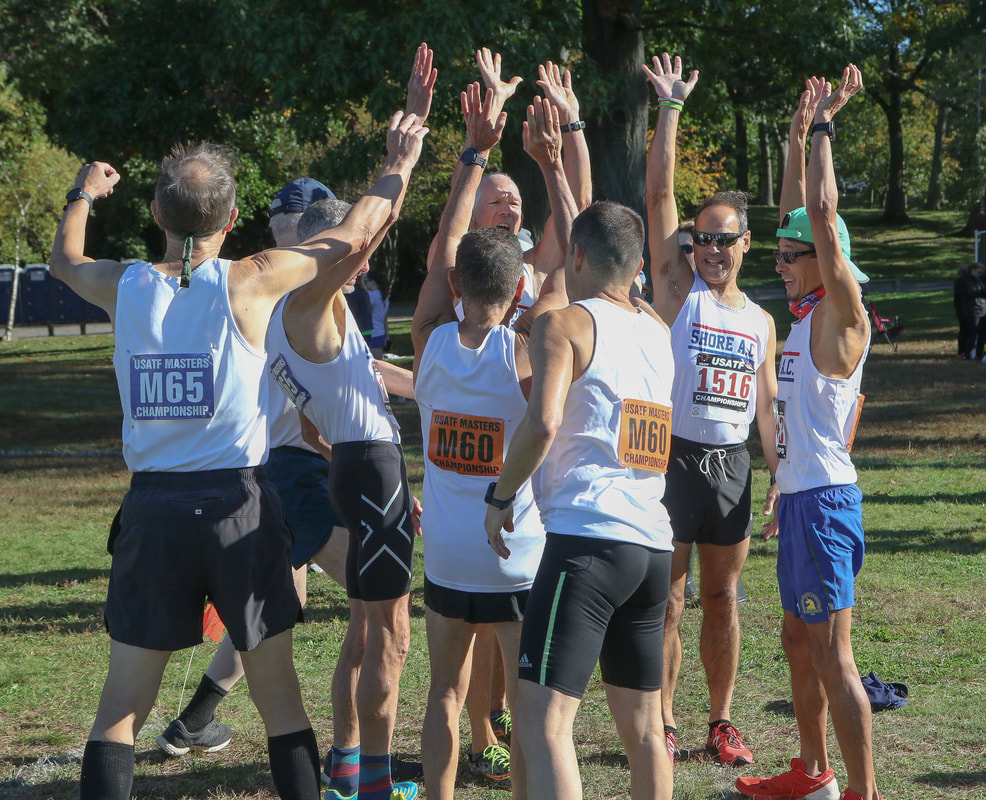 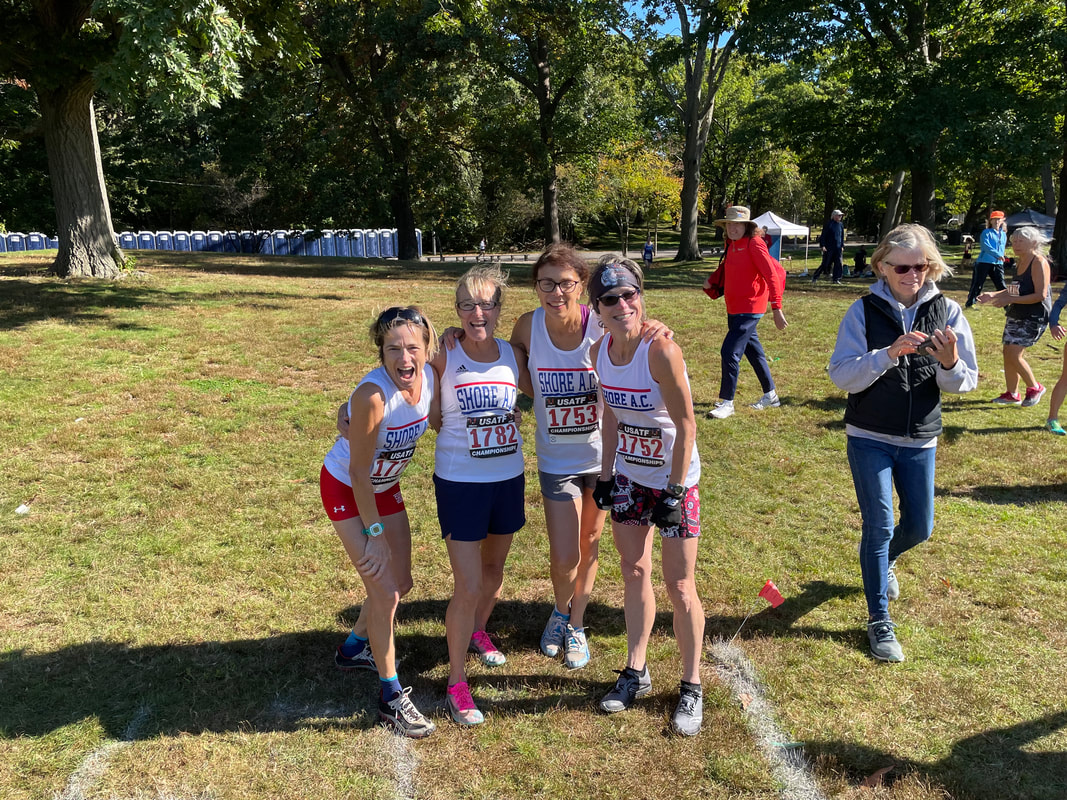 More Than a Feeling

We runners delight in expressing ourselves through song.  Harken then, dear reader, to this rendition of the rock group Boston's hit song from 1976.  Hey, sing along if you wish.

What event, you ask, could inspire this paean?  'Twas a cross country race in the *city* of Boston.  And not just any race!  Nay, it was the culmination of the hotly contested 2021 USATF National Masters Long Distance Running Grand Prix.  A bevy of top harriers -- nearly 300 from throughout the country -- converged on Franklin Park in the Dorchester district of Boston on Sunday, October 17, to battle for glory.

Among this multitude were 20 proud members of Shore Athletic Club.  Each of us aimed to bust our guts on the 3-loop, 5-kilometer course, most in support of an age group team.  We entered three teams: a men's 60+ squad, a men's 70+ troop and a women's 50+ contingent.  In addition, there were six SAC athletes who ran as individuals not on a team.

​Let's focus first on the Shore AC teams.  Given that the competition commenced with the men 60+ division, our 60+ and 70+ men's teams plunged into the fray with the first race of the day.  Vying mightily against six other high-quality teams, our 60+ crew snared a sensational second place.  Ultramarathon champion Rick Lee spearheaded our attack, willing his weary legs to a tremendous fourth-place finish in 19:18, only 22 seconds behind race winner Daniel King of Athletics Boulder.  And what, you ask, made Rick's legs so weary?  Only 6 days prior, Rick had run the Boston Marathon, winning his 60-64 age group with a phenomenal 2:49 performance.  It's hard to believe that Rick could even jog a mere 6 days later!  Next into the barn for Shore AC came Mike Salamone.  Mike, like Rick, is a new stallion in the SAC stable.  He crushed the course with a superb 20:16.  Our third steed, Don Schwartz -- yet another newbie -- galloped across the threshold in a splendid 21:09 to wrap up team scoring with 25 points.  This left us only 9 points shy of champions Athletics Boulder and their 16 points.  Veteran Shore AC warhorses Kevin Dollard (21:16) and Reno Stirrat (21:26) defended the team's backside by adding displacement points to the other five teams in the fray.  With their second-place finish, our golden boys locked down second place in the 2021 Grand Prix.  AWESOME, LADS!!! 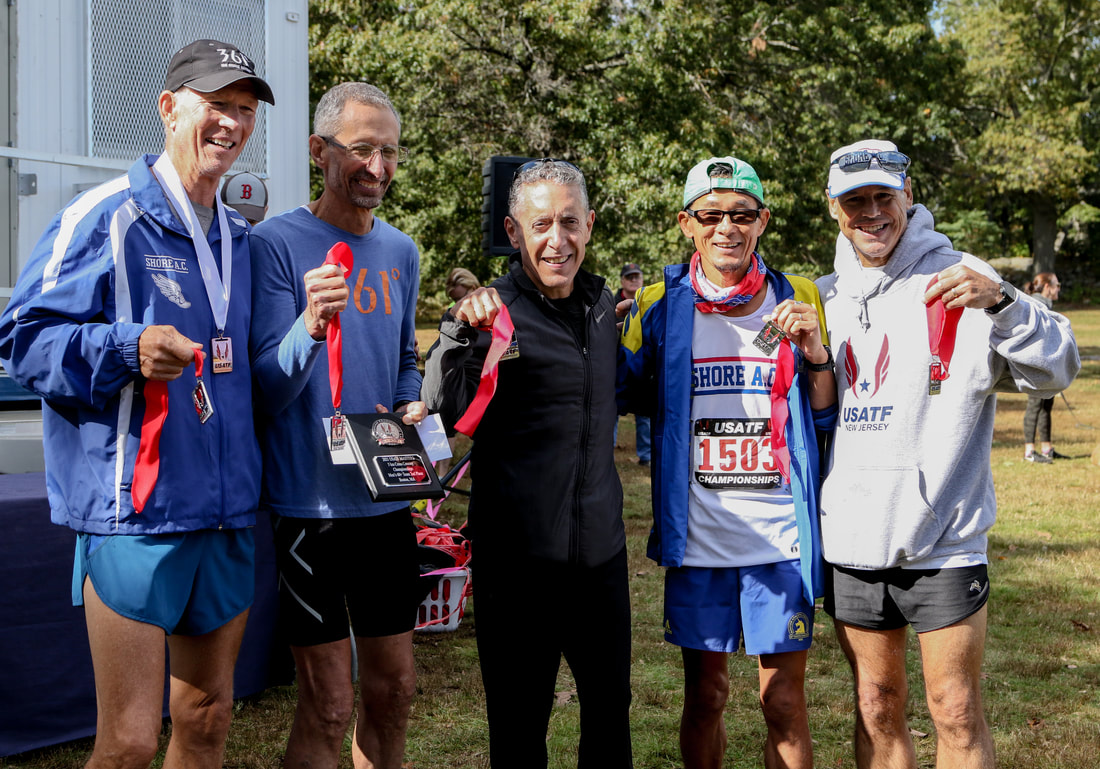 Sunday, October 17, 2021, Boston, MA: The Shore AC men's 60+ team revels in their hard-earned second-place finish at the USATF Nat9ional Masters 5K XC race.  Left to right: Kevin Dollard, Reno Stirrat, Mike Salamone, Rick Lee and Don Schwartz.
Next came Shore AC's men's 70+ team.  Freshly minted septuagenarian Spider Rossiter celebrated his return to national-level racing after a several-year hiatus by crossing the goal line first for our 70+ team.  His 24:56 clocking benefitted from a mad dash to the goal line.  The next man to hit paydirt was bulwark Przemek Nowicki.  He's been a steady rock for 7 years in Shore AC national LDR competition.  This day was no exception, as "Prez" powered over hill and dale to check in with an impressive 27:29.  The third scorer for our distinguished detail was 2021 USATF National 12K age 80-84 champion Roland Cormier, whose 31:40 helped to squeeze the Shore AC men's 70+ team into fourth place out of six teams.  Old-yet-proud cavalry John Kuhi (35:49) and Roger Price (46:14) persevered through pain to provide the team with backup insurance.  Congratulations, gentlemen!!! 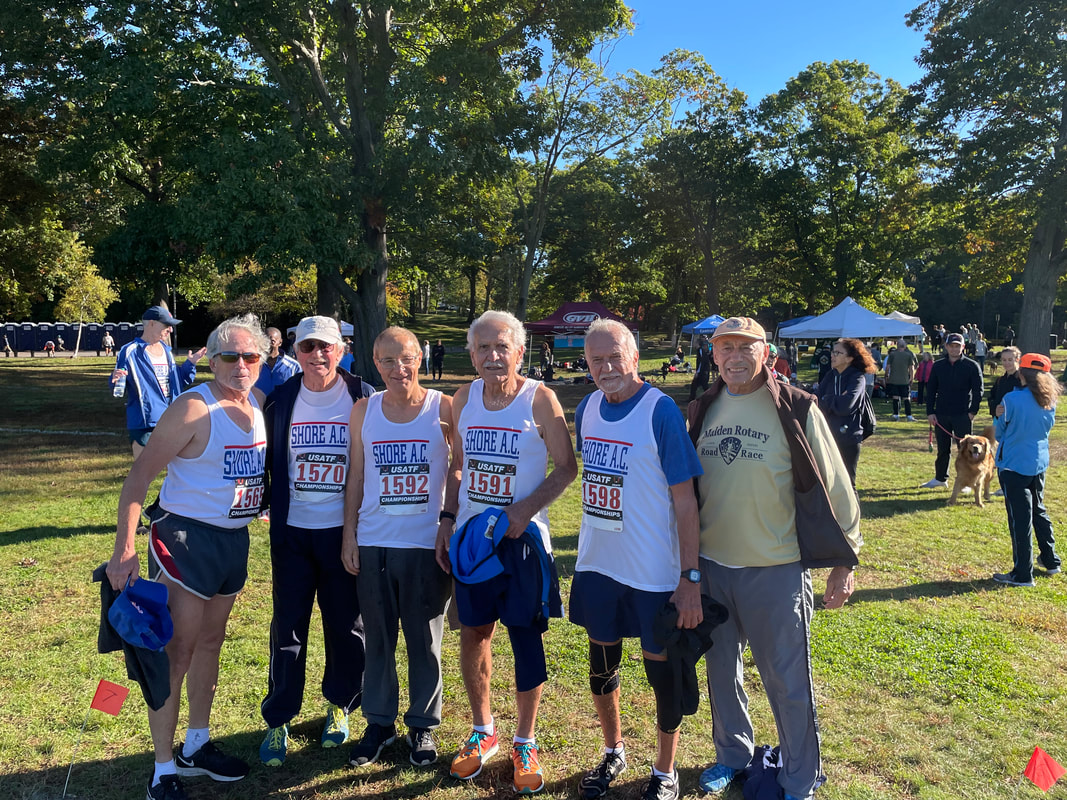 Sunday, October 17, 2021, Boston, MA: Elder statesmen of Shore Athletic Club exude confidence while working to retain body heat in the pre-race morning chill.  Left-to-right: Spider Rossiter, Roger Price, Przemek Nowicki, John Kuhi, Stan Edelson (who ran individually) and Roland Cormier.
There were five Shore AC runners in the men's 60+ race that could not be assigned to teams and thus ran as individuals.  Race walker extraordinaire Barry Blake strode like wildfire over the undulating course and etched a flaming 30:41 into the results.  Fellow race walker Tim Chelius chose instead to jog the trails, wending his way to the finish line in 29:41.   Stan Edelson, one of two octogenarian Shore AC harriers in the race, won the 80-84 age group with a scintillating time of 30:46.  SAC deck-swabber Scott Linnell muddled his way to a 22:05, while First Mate Harry Pino gunned his engines in the final mile to pass a multitude of foes and sail home in a rousing 22:56. 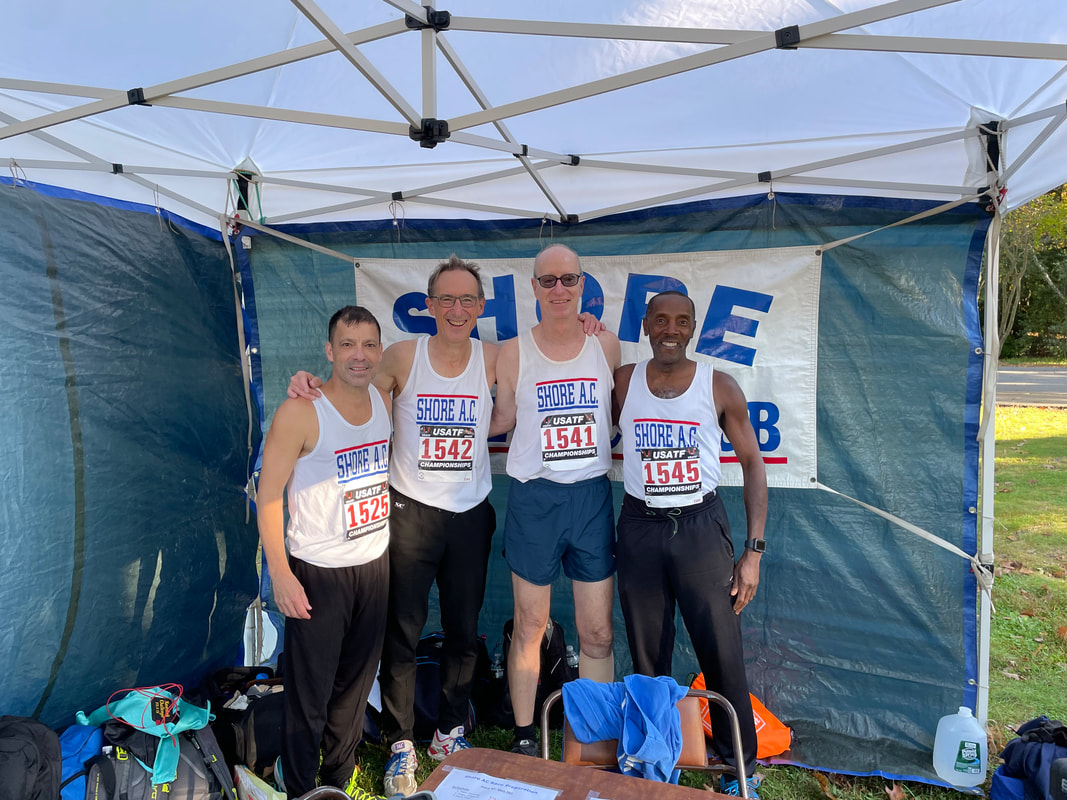 Sunday, October 17, 2021, Boston, MA: Shore AC men age 60 and over gather for a picture of the "B" team that was disallowed due to too many out-of-region members.  Left to right: Harry Pino (NY), Scott Linnell (NJ), Tim Chelius (PA) and Barry Blake (MA).  Photograph by Denise Dollard.
Shore AC also had an individual entrant in the next race.  48-year-old Mike DiLeva established a cross country personal best in the men's 40-59 race by tripping the clock in a terrific 20:45.  Well done, Mike!!! 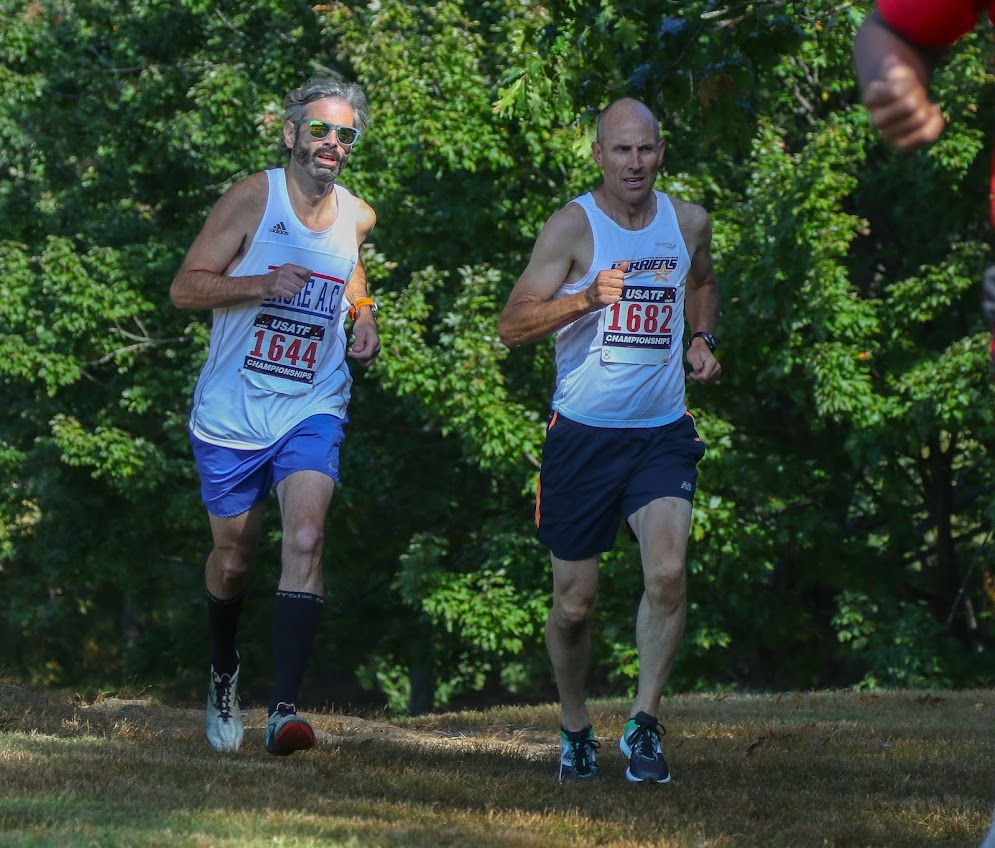 Sunday, October 17, 2021, Boston, MA: Active Shore AC member Mike DiLeva battles a fellow contestant during the men's 40-59 race.  Photograph by Denise Dollard.
We saved the best for last.  A determined Shore AC women's 50+ quartet outperformed expectations to nail fourth place out of six teams.  As a result, they locked up second place in the 2021 USATF National Masters Team Grand Prix!  Barnstormer Suzanne La Burt piloted this spirited team with a jaw-dropping 21:03.  Her age grading equated to a phenomenal 85.71%, good for fourth overall among the women.  63-year-old Diane Rothman sped like a pure-bred Arabian horse over the bucolic parklands to finish second for the Shore AC 50+ team with a magnificent time of 24:54.  The team's fourth place finish in this XC race, and second place in the 2021 Grand Prix, was cemented when 66-year-old Susan Stirrat motored home in 27:34 to wrap up the scoring.  Insurance runner Leslie Nowicki continued her remarkable improvement by crossing in a very respectable 28:03.  Brava, ladies!!!

Sunday, October 17, 2021, Boston, MA: And they're off!  The start of the women's masters race features Shore AC ladies smack dab in the thick of the fight.  Diane Rothman is in the red shorts in the middle of the picture, with Suzanne La Burt to her left (our right) and Susan Stirrat and Leslie Nowicki obscured by the women in green jerseys.  Photograph by Rick Lee.