Please join us for the first time ever, New Jersey Reunion Track Party! This is a fundraising event where we will be celebrating all sports, Shore AC's 85th Anniversary,
​and most importantly, Elliott Denman's 85th Birthday!

This is a once in a lifetime opportunity to come together to celebrate the sports we love most, enjoy the company of those like minded people and celebrate 85 years of a legendary man's life and the club's anniversary, which he re"found". Let's reunite and/or unite to celebrate Elliott's 85th! This fundraising event will take place at a desirable and staple Jersey Shore spot, McLoone's Pier House in Long Branch. Tim McLoone, past Shore AC president and Hall of fame member, will MC the event. Enjoy spectacular views of the Atlantic Ocean, two complimentary drink tickets, passed hors d'oeuvres, buffet lunch, dessert, coffee and tea for $85. Under 21 tickets available. All proceeds from the event will benefit the Shore Athletic Club.

Shore Athletic Club’s purpose is to assure long term viability of the Shore A.C., a 501c3 organization. Its aim is to develop young and junior long distance runners and track and field athletes. Annually, Shore A.C. hosts 10 events covering road, XC and T&F races. Shore A.C. wants to engage athletes, families, friends and community partners in promoting and perpetuating long distance running and track and field in the shore area! We are able to do this through membership, event support, sponsorship, fundraising and volunteering.

Join us in celebrating Shore A.C.’s 85th Anniversary and our passionate leader, Elliott Denman’s 85th Birthday year! In 1964 Elliott, revitalized the Shore Athletic Club. Shore A.C. was originally found by brothers, Ed and Art Wisner in the 1930’s. Don Johnson had been a member of the old Shore A.C., active from 1930-1950, and reminded Elliott of the club’s name when he wanted to start a running club of his own. He added that the club had done all kinds of amazing things! That was all Elliott needed to hear to make sure the name stuck and its legacy continued!

In the words of Elliott Denman, “Since inception, the Shore Athletic Club has offered an implausible amount of events to the local community, particularly Monmouth and Ocean counties. These events range from track & field meets, road races, marathons, race walks, cross country races, gala dinners, 50 mile race walk and 100 mile relays! Shore A.C. is great road warriors too, the team has taken European tours, ran and walked and jumped threw things all over North America, and beyond. As many kids aged, they didn’t fade away – they just stuck with the sport they loved, and embraced the whole, great Masters movement, as running became a true lifetime sport. Along the way, Shore AC’s “family” just grew and grew and is now mobile. Shore A.C. has “alumni” all over the nation and the world, along with the multitudes keeping us going right here on home turf. We “adopted” the birth year of 1934 for the “old” Shore A.C. when we formulated three decades later. This year is special because we will be celebrating Shore AC’s 85th Anniversary and our founder’s 85th Birthday year!” 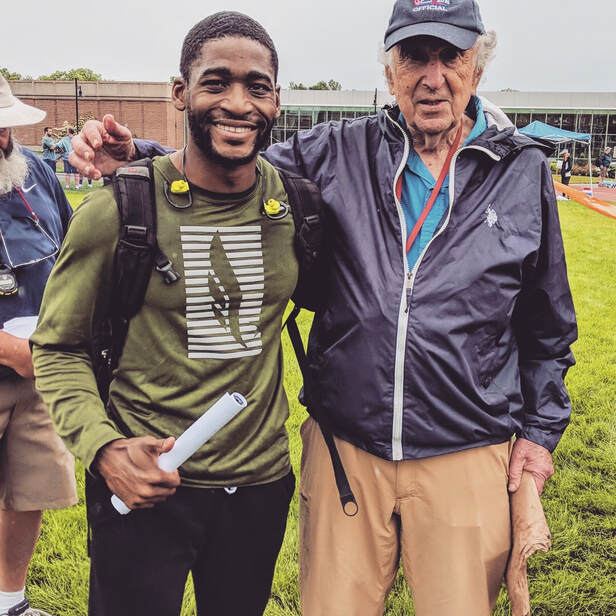 ​Let's unite to celebrate
Elliott's 85th & make it a night to remember for a very deserving man! ​